The Gallina Extremeña Azul (extremenian blue hen) is an ancient breed with dual aptitude. It is currently recognized as a Native Breed in Danger of Extinction. The “Extremeña Azul” breed began to take shape as such in the 1980s. In the early 1990s, the Junta de Extremadura began a recovery program for the “Extremeña Azul” hen. This hen has traditionally been raised in freedom in farmhouses, as it has low food requirements. The hardiness of the Extremeña Azul hen is the characteristic most appreciated by poultry farmers, as evidenced by its resistance to disease, its low nutritional requirements, its ability to graze and prey, and its good maternal behavior.

Currently there is an association that cares about La Gallina Extremeña:: ACGEXA. The ASOCIACIÓN DE CRIADORES DE GALLINAS DE RAZA EXTREMEÑA AZUL (EXTREMENIAN BLUE HEN BREEDERS ASSOCIATION) was founded in 2010 and currently has 23 farms belonging to the Association. 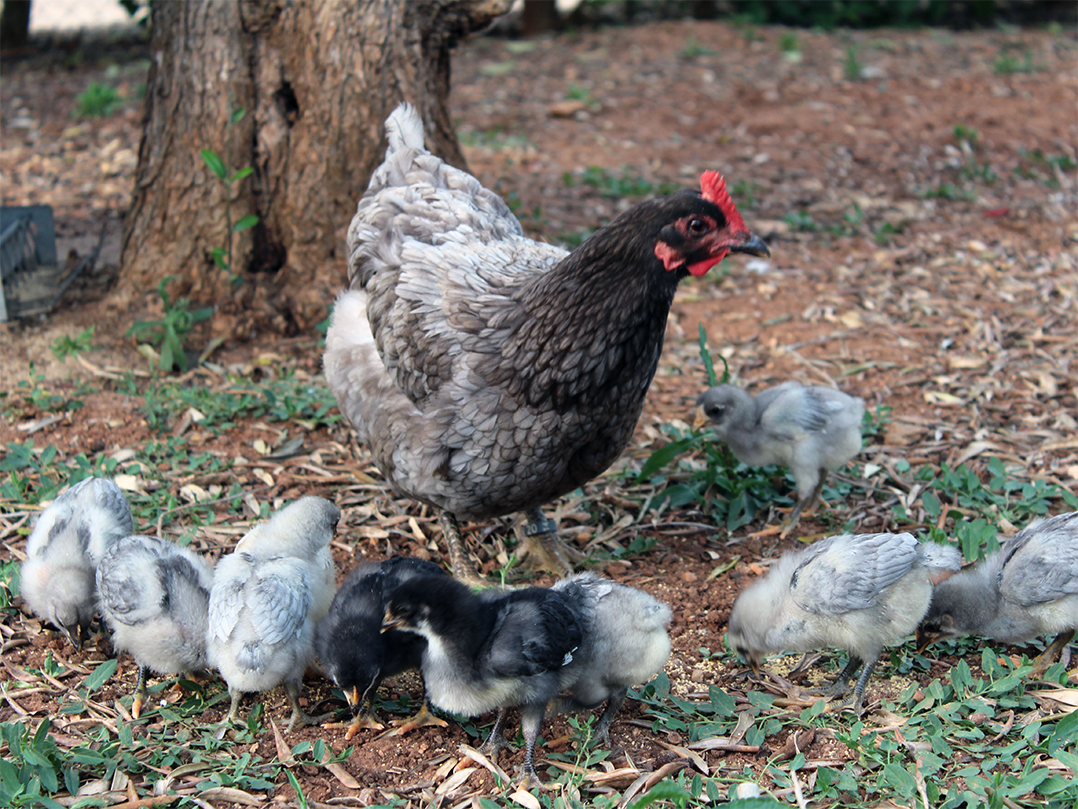 MORPHOLOGY OF THE EXTREME RACE

General Characteristics: It has smooth feathers, a simple crest and naked tarsi. It has three varieties of plumage color: blue, dirty white and black. The distinctive morphological features are the color of the plumage of the heterozygote, that of the ears and tarsi, and also the color of the egg. The plumage is not very tight with rounded feathers. The egg is medium in size (53-63 g) and light brown in color. The weight of the adult rooster is 3 to 4 Kg and the weight of the hen is 2 to 3 Kg. The diameter of the rings for the rooster is 22 and the diameter of the rings for the hen is 20.

SPECIFIC MORPHOLOGY OF THE ROOSTER

SPECIFIC MORPHOLOGY OF THE HEN

In addition to the blue prototype, with or without edging, dirty white (white dotted with gray or black) and black (with green iridescence) are accepted as plumage color varieties, corresponding to homozygotes BlBl and bl bl) respectively.

The morphological qualification will be carried out by visual appreciation through a qualification by regions that will verify the adaptation of the specimen to the breed standard. As a result of this assessment, the animal will be classified as Reproductive Apt (AR) or Reproductive Unfit (NR). The qualification is made from 5 months of age. If the technician considers that the animal is not sufficiently developed to be able to assess it, a rating of “pending” is assigned, and it is repeated when it is older, and the characteristics to be assessed are well defined.

This website uses cookies to improve your experience while you navigate through the website. Out of these, the cookies that are categorized as necessary are stored on your browser as they are essential for the working of basic functionalities of the website. We also use third-party cookies that help us analyze and understand how you use this website. These cookies will be stored in your browser only with your consent. You also have the option to opt-out of these cookies. But opting out of some of these cookies may affect your browsing experience.
SAVE & ACCEPT
Go to Top